Prior to joining ACI, Mr. Almeida most recently served as an operating partner at Advent International, one of the world’s largest private equity funds, supporting business development at the fund’s portfolio companies, with a particular focus on growth initiatives that support higher sales and earnings.

During his 17-year tenure at The Western Union Company, Mr. Almeida advanced through a series of general management roles of increasing responsibility. He last served as president of Global Money Transfer. In this role, Almeida led Western Union’s $5 billion consumer business across more than 200 countries and was integral to proactively expanding the company’s digital footprint and growing digital revenues meaningfully and profitably while positioning the company as a global digital leader in money transfer.

Mr. Almeida is fluent in English, Spanish and Portuguese. He serves on the Board of Millicom International Cellular S.A. and is the Chair of the Compliance and Business Conduct Committee. Mr. Almeida holds a bachelor’s degree in Civil Engineering from Centro Universitário Instituto Mauá de Tecnologia in São Paulo and a Master of Business Administration from Fundação Getulio Vargas in São Paulo. He extended his education at Harvard Business School, The Wharton School and the International Institute of Management (IMD).
Speaking At
Launching a New ACI
Closing Remarks 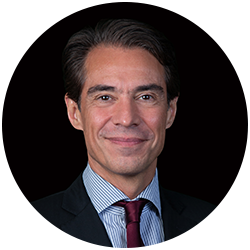